By Pat Dooley May 14, 2022 11:27 am
By Pat Dooley | May 14, 2022 11:27 am ET
In college towns across America, the dream for a lot of young men is to play for the hometown school. Other high school kids want to get away from home to spread their wings (some too close to the sun).
Certainly at Florida, there is a rich history of Gainesville Gators, players who were in high school in the city and matriculated a few miles down the road to go to college.
With the recent commitment of Creed Whittemore, a Buchholz product, to Florida, we started thinking about the players who grew up in Gainesville playing football for the Gators.
Creed’s brother Trent is expected to be a big part of the 2022 Florida football season if he can stay away from injuries and there is nothing like being on a college football team with your brother.
Sometimes, getting the local kid to commit is easy. Sometimes, it takes a lot of effort. Still other times, you don’t know what is right down the road until it slaps you in the face.
Here is one man’s opinion on the 10 best from Gainesville to play for the Gators. 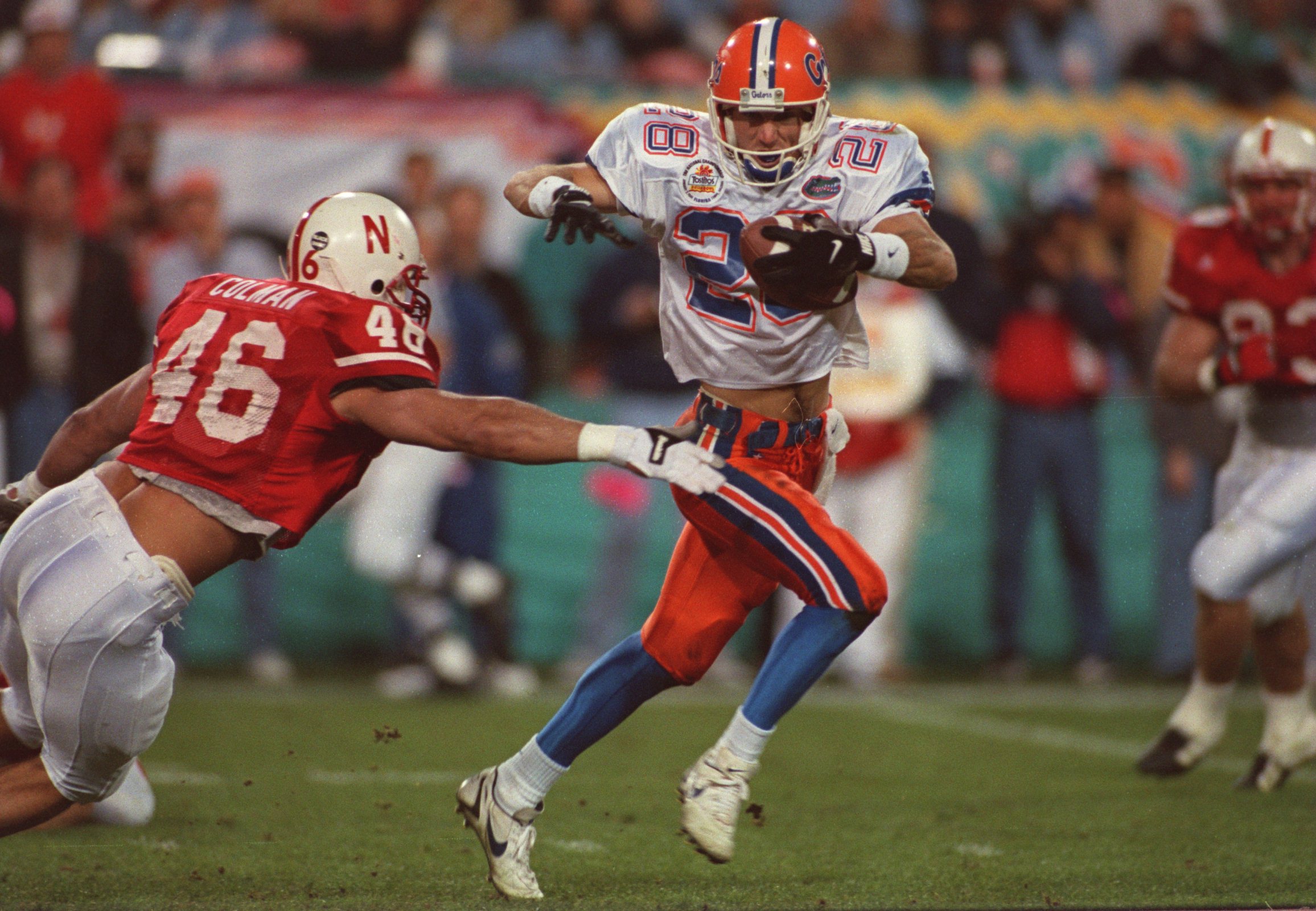 Stephen Dunn/ALLSPORT
The story on Doering, who played at P.K. Yonge goes something like this. He was considering Florida State but went to a Florida-FSU baseball game and knew he couldn’t stand the Seminoles.
So, he walked on at Florida, caught a fairly meaningful touchdown pass at Kentucky and went on to set the record for most touchdown catches by an SEC player until Heisman winner DeVonta Smith recently broke it. 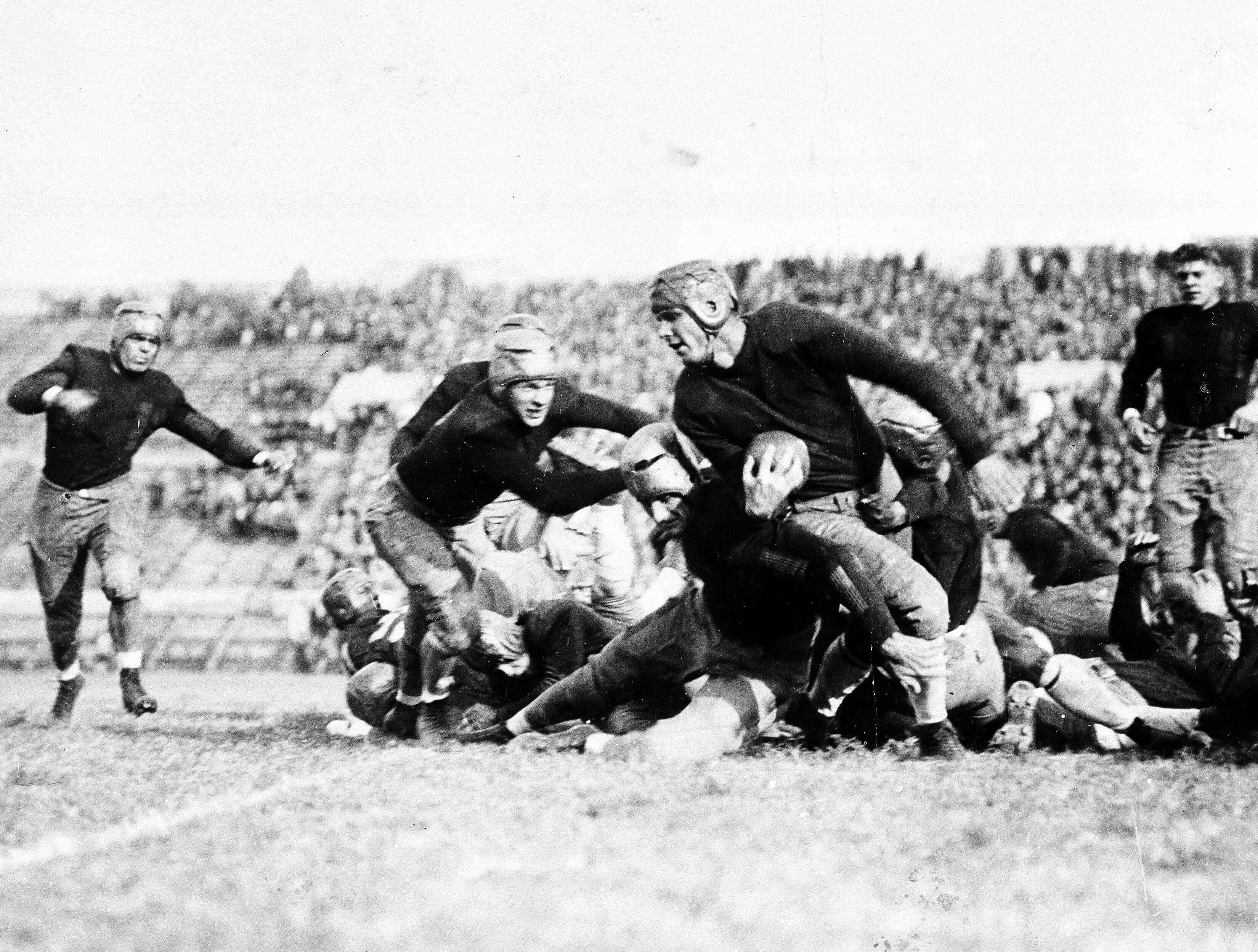 AP Photo
His family moved to Gainesville when he was young and he attended Gainesville High. At Florida, he was the right end who did it all and was also a member of the Gator basketball and baseball teams.
Van Sickel is the first-ever All-American at Florida, earning that honor in 1928 on a team that went 8-1 and led the nation in scoring. He went on to become an actor and a stuntman in Hollywood, and in 2007, was named one of the 100 greatest players in the history of Florida high schools. 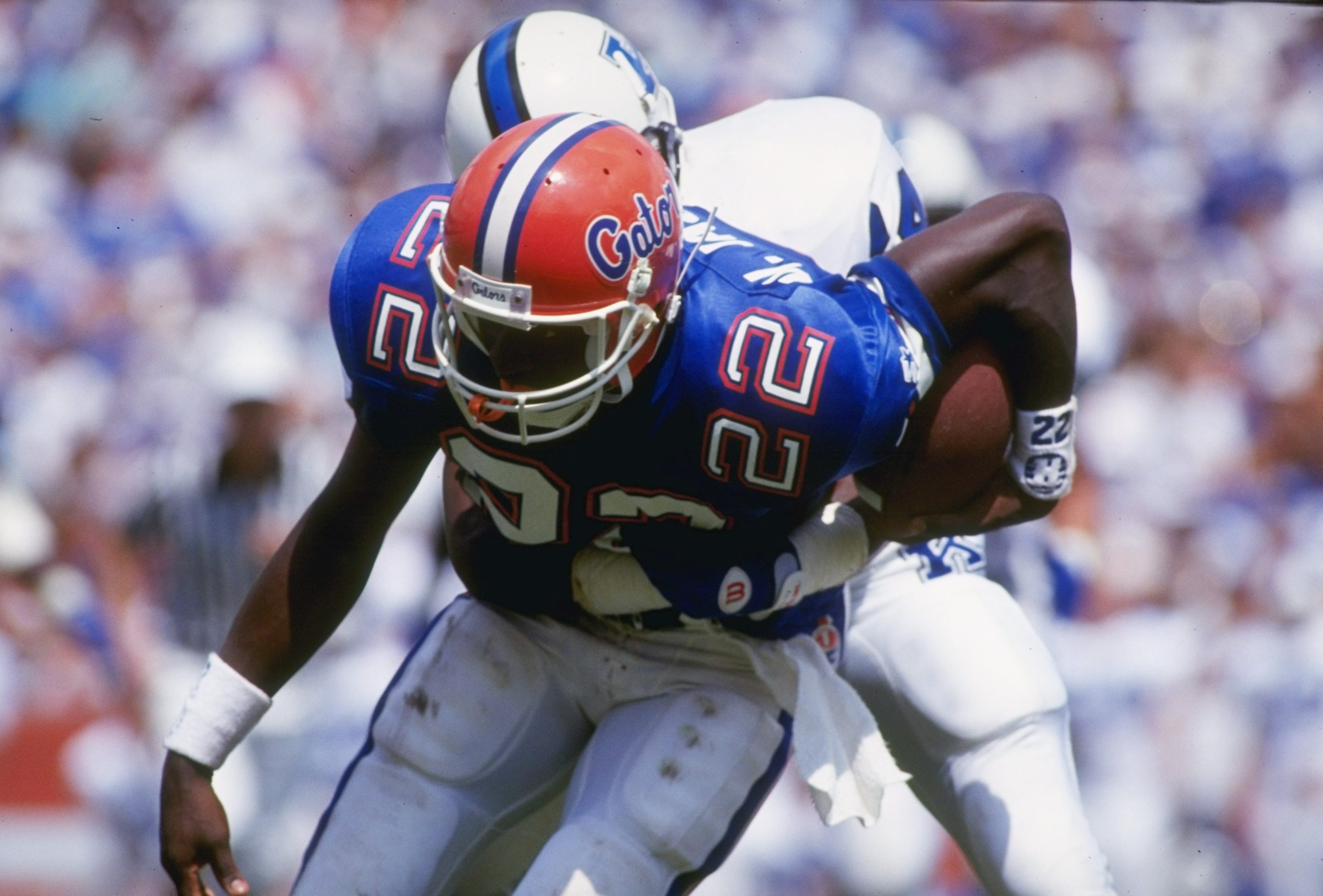 Scott Halleran /Allsport
The son of a former Gator great (who was also the first black player ever signed by UF), Willie Jr. was a physical wide receiver at P.K. Yonge who was a big part of Steve Spurrier’s early seasons at Florida.
He finished his Florida career with 161 catches, 2,172 yards and 24 touchdowns. At the time he left Florida, he was second all-time in receptions and yards.
He went on to play nine seasons in the NFL. 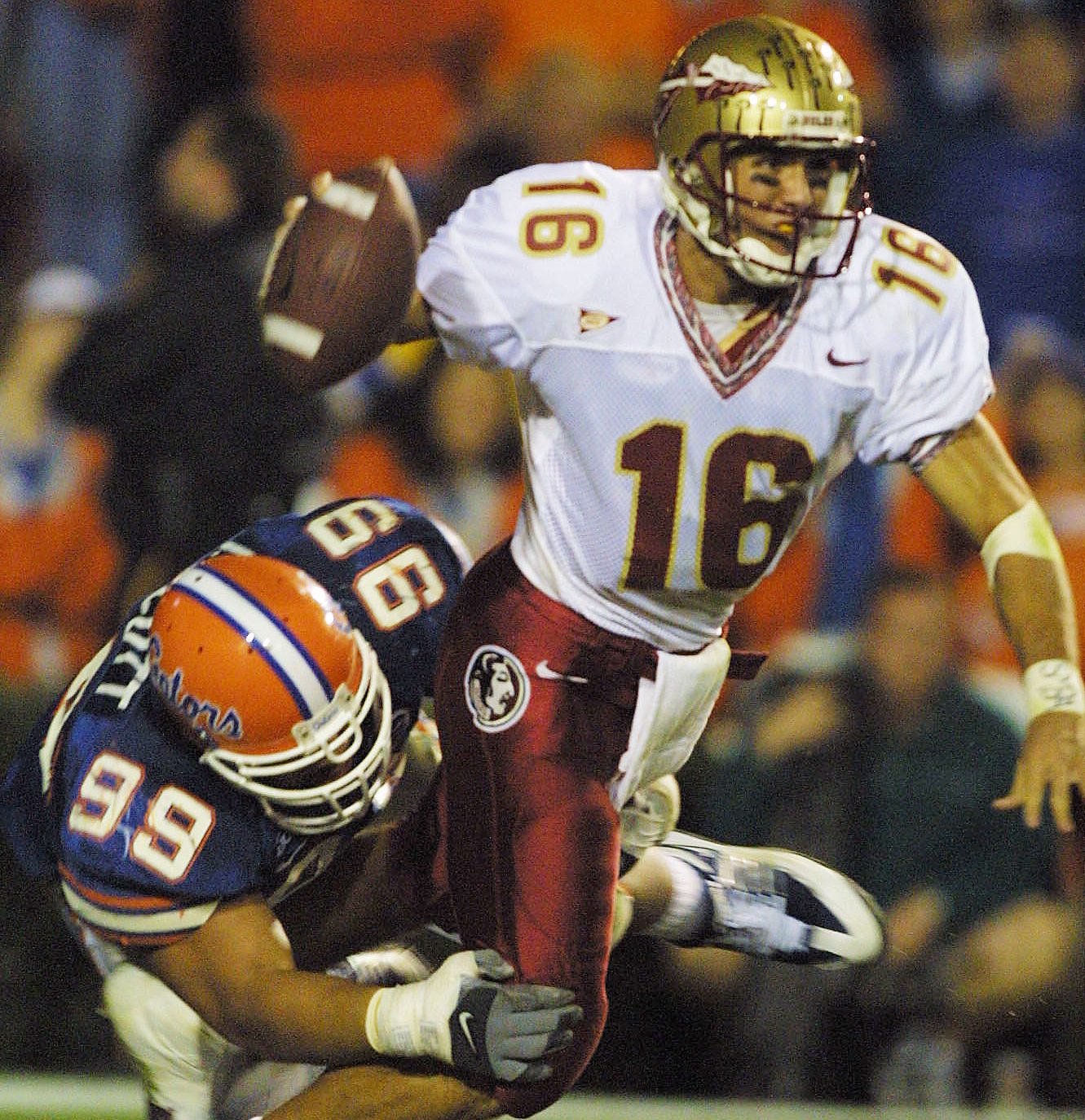 Scott Halleran/ALLSPORT
Scott went to Gainesville High and was a beast in the middle for Florida after deciding to attend UF. He was twice a second-team all-SEC performer for Steve Spurrier and then Ron Zook.
Scott played for six years in the NFL for two teams and had 40 starts. 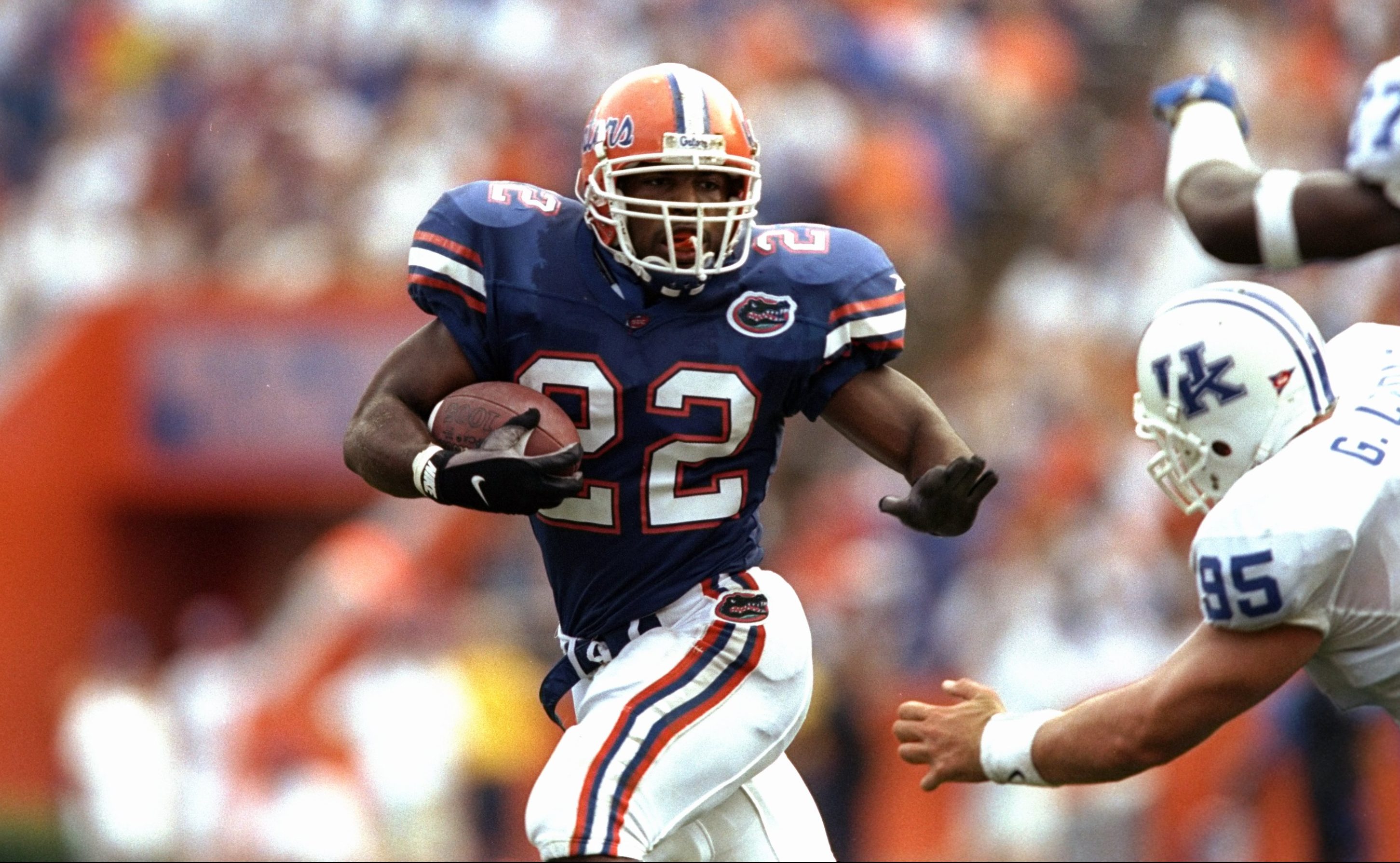 Andy Lyons /Allsport
Willie’s younger brother was a rugged tailback at P.K. Yonge who could do it all. At Florida, he was part of the three-headed backfield that led Florida to the 1996 national title.
In four seasons – one cut short by a knee injury – Jackson rushed for 1,794 yards and 17 touchdowns and caught four more including a big one against Tennessee in ’96. He also put the exclamation point on the national title game with a 42-yard scoring run to clinch it. 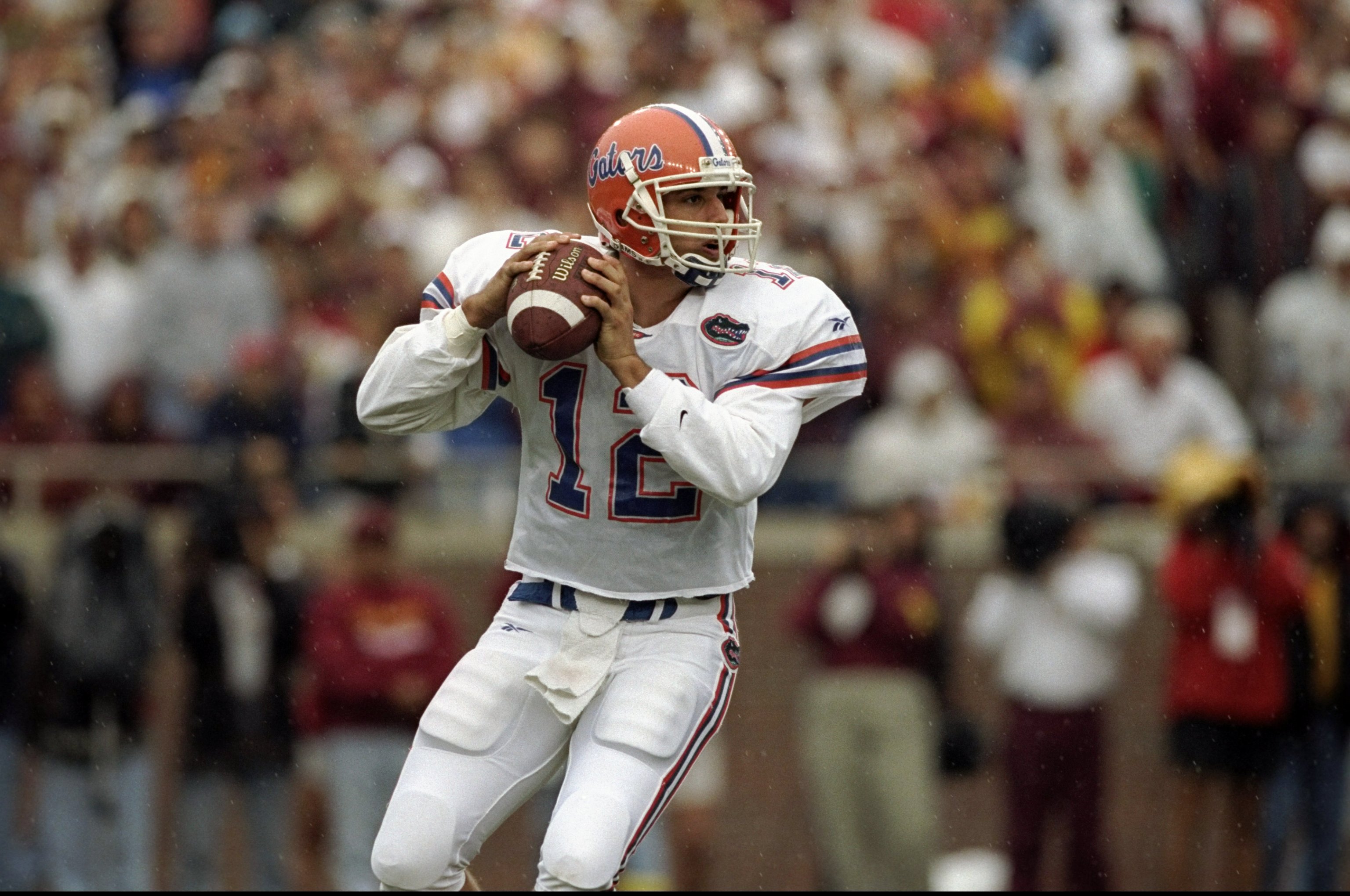 Andy Lyons /Allsport
It wasn’t easy for Johnson filling the shoes of Danny Wuerffel, but he had a career that is a little underrated.
After a stellar career at Buccholz that included signing a pro baseball contract, Johnson finished at Florida with 7,144 yards passing and 62 touchdowns and went on to last seven seasons in the NFL. 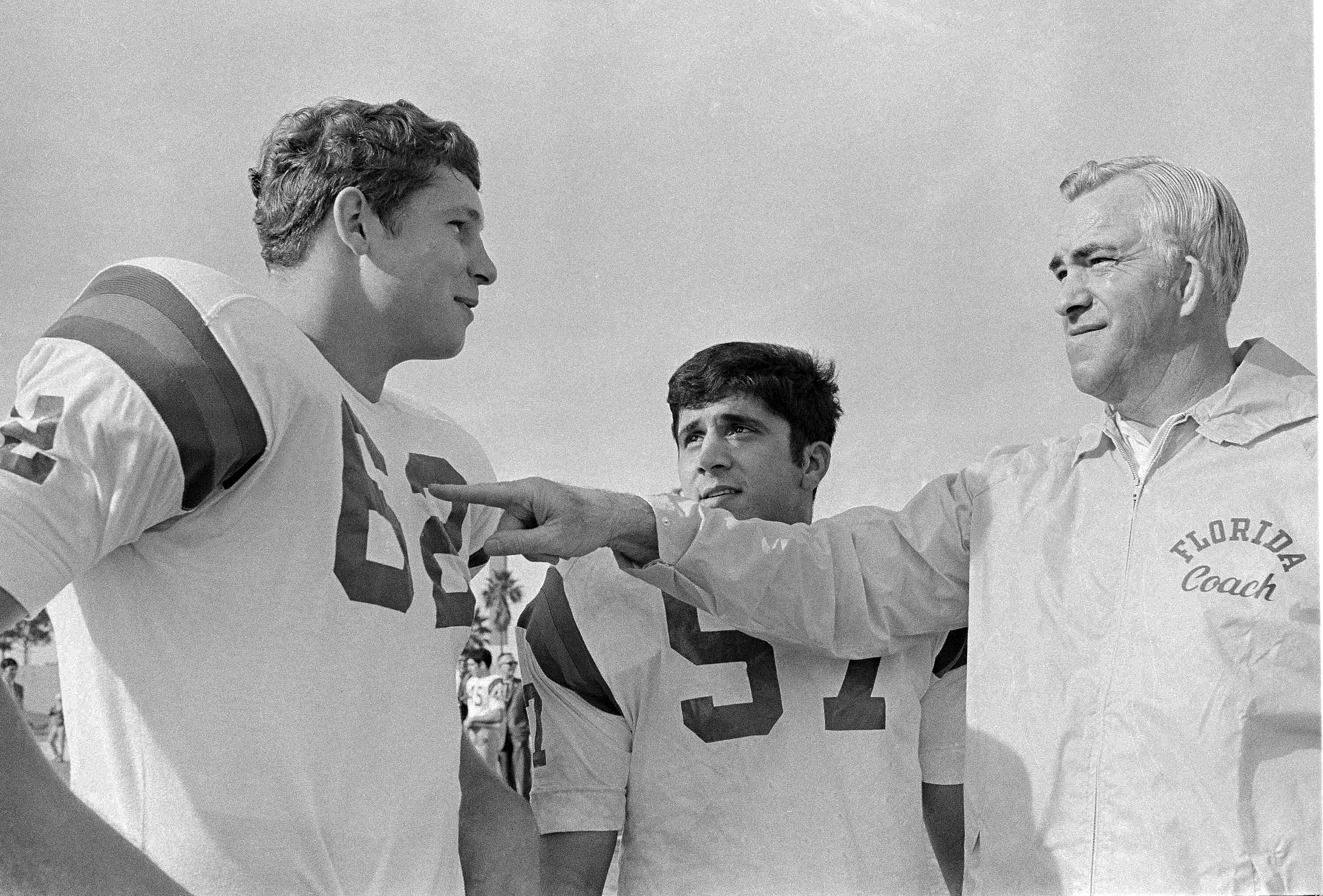 AP Photo/File
Although Carr grew up in Pensacola, he was born in Gainesville so we included him on this list.
Carr was the center for those great Spurrier teams and was named first-team All-American during Spurrier’s Heisman year of 1966.
He coached for three years before going into administration becoming the athletic director at Florida and later Houston. 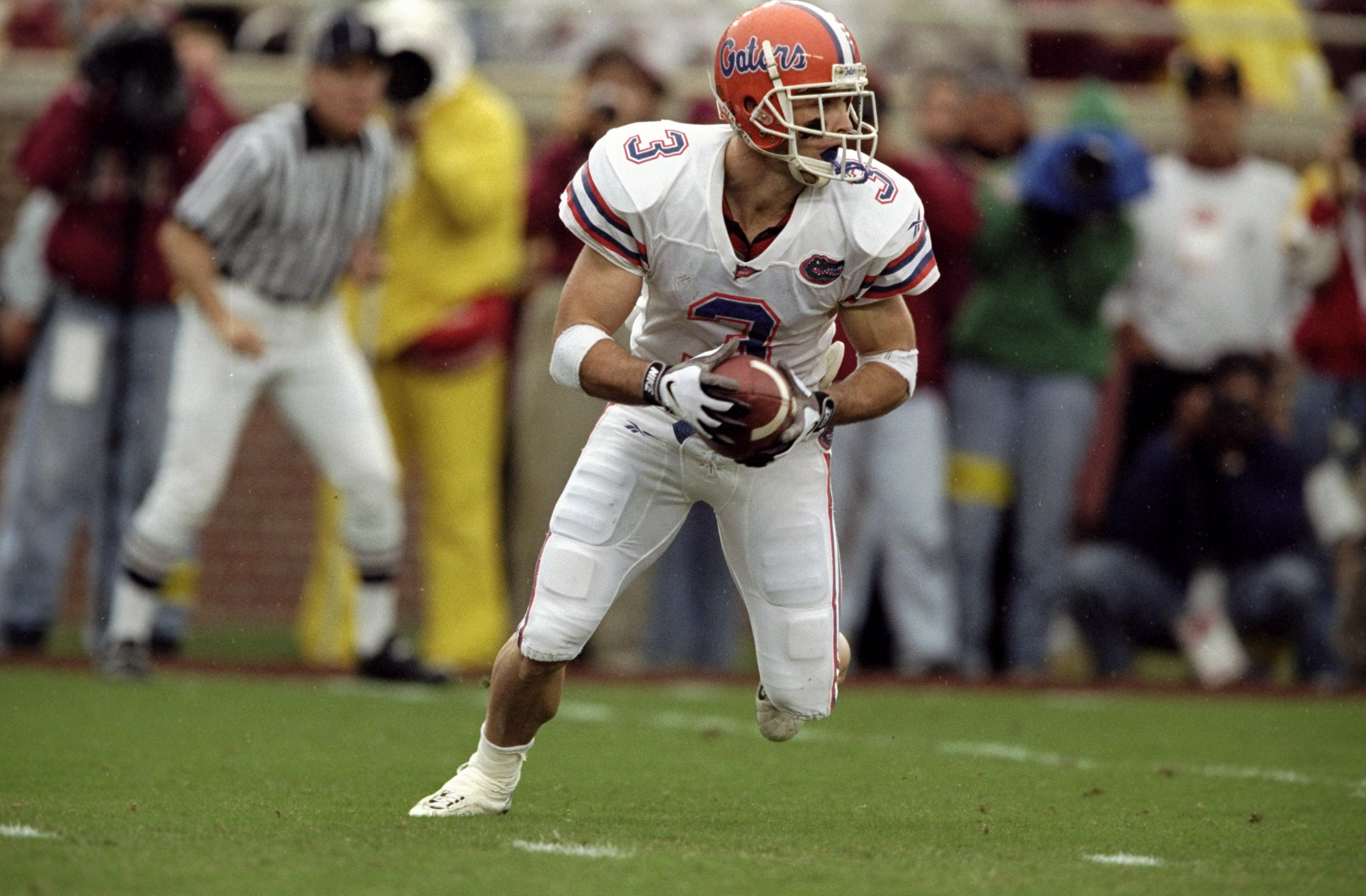 Andy Lyons /Allsport
McGriff was the son of another former Gator great Lee McGriff and played multiple positions at P.K. Yonge before following in his father’s footsteps and attending UF.
He was a big part of Florida’s success under Spurrier before blowing up in his senior year when he caught 70 passes for 1.357 yards in 1998. The yardage mark is still the UF record. 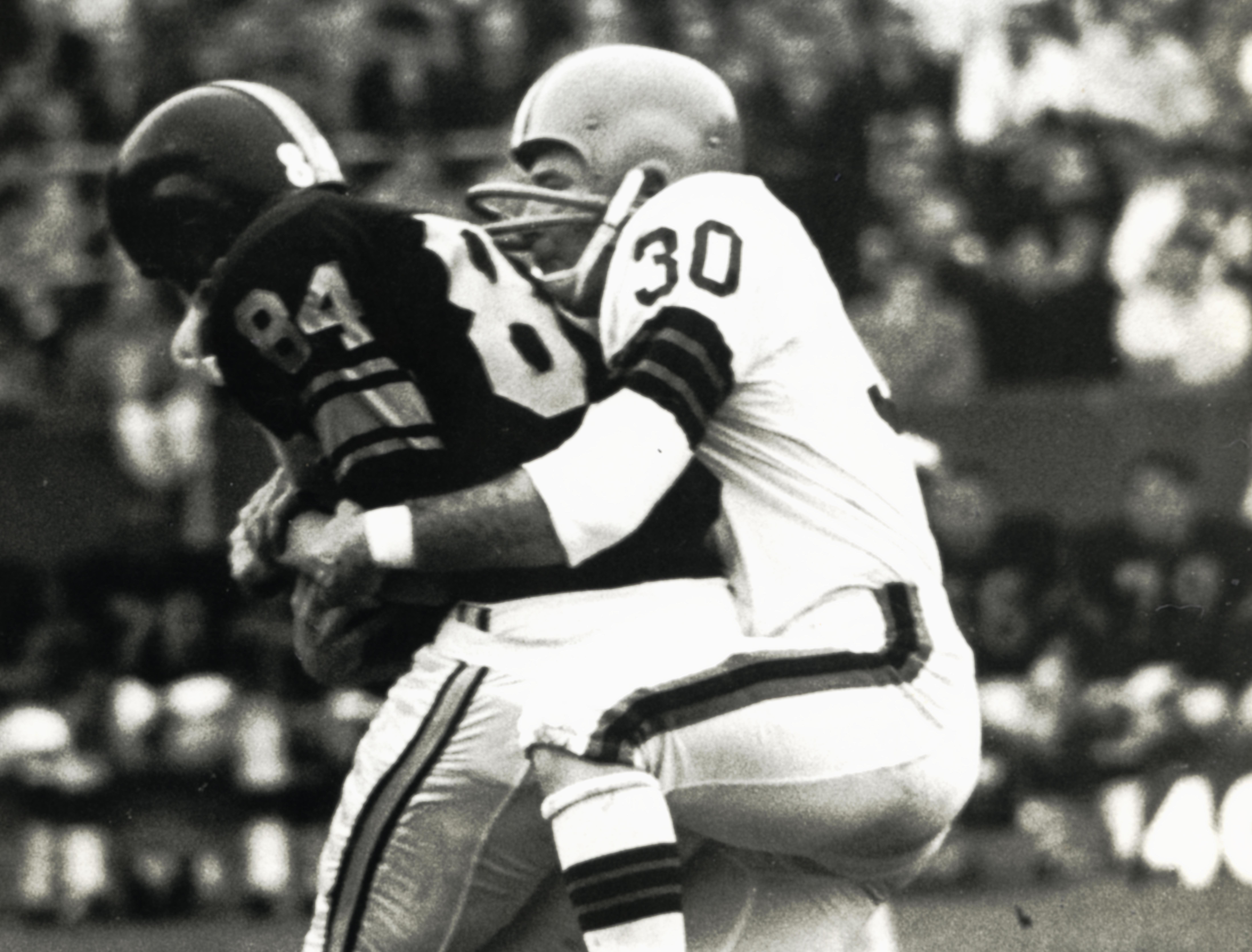 Malcolm Emmons- USA TODAY Sports
Born in Long Beach, California, Parrish grew up in Gainesville and attended P.K. Yonge. He chose Florida to play both football and baseball and was an excellent running back and defensive back for the Gators.
He was named the national back of the week after Florida beat Vanderbilt in 1957 when he ran for 111 yards and stopped the Commodores near the goal line with a crushing tackle.
Parish went on to play eight years in the NFL and fought for the rights of NFL players right up until his death in 2019. 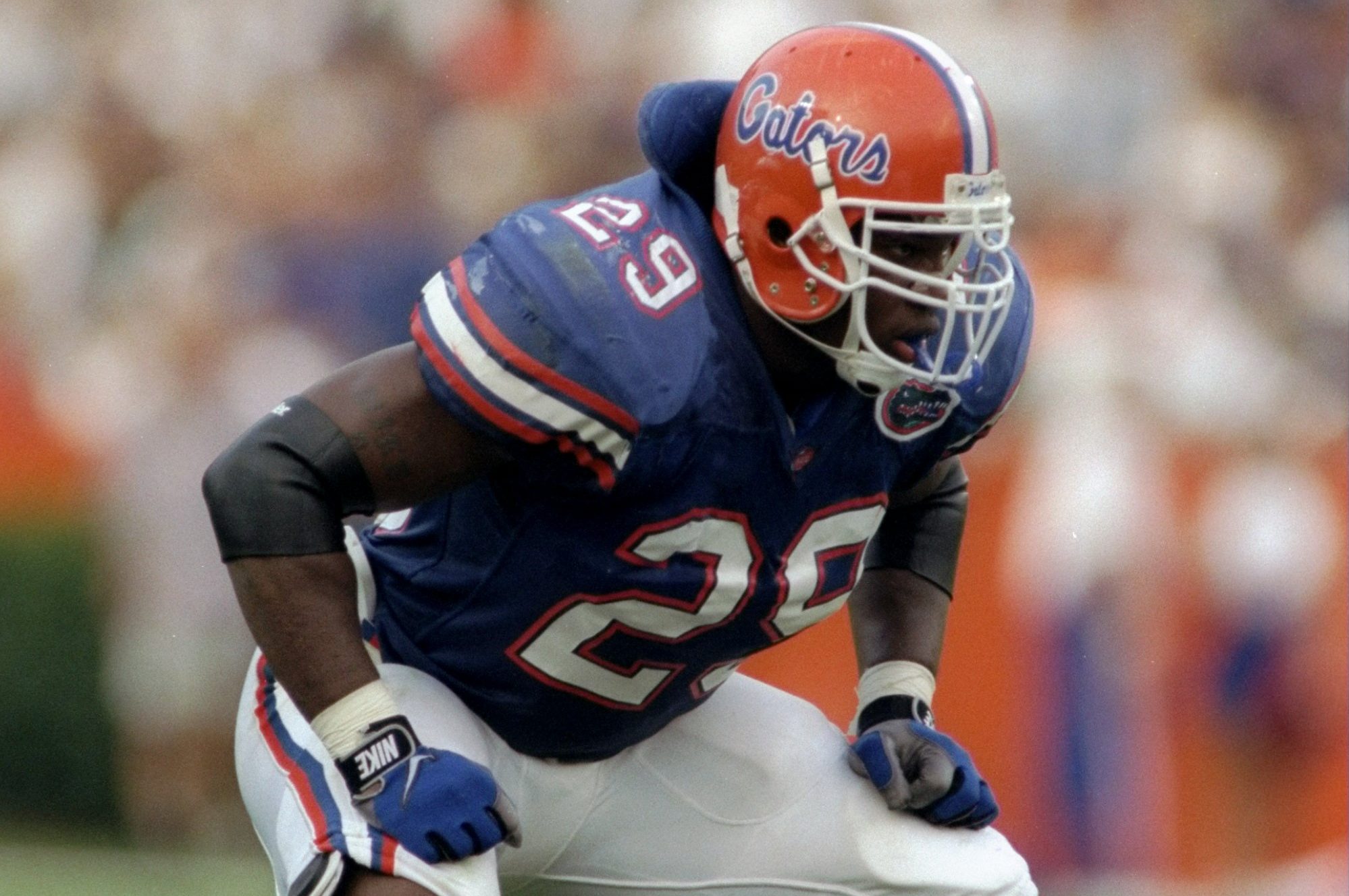 Scott Halleran /Allsport
Just a few clicks down the road and still in Alachua County, we have to include players such as Mike Peterson, Dwayne Dixon and Zac Zedalis on this list.
Peterson was the heart and soul of the Florida defense after leading Santa Fe High to the state championship as a quarterback.
Dixon was an amazing wide receiver who had 92 catches in his last two seasons leading Florida in receiving in 1982 and ’83.
Zedalis was an All-SEC center in 2001.

This site is not endorsed by, sponsored by, or affiliated with the University of Florida.
Powered by WordPress VIP